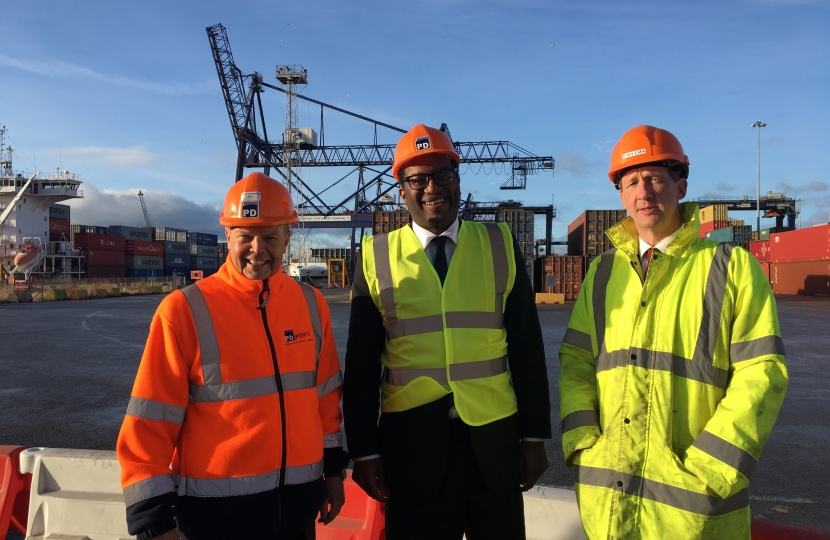 A senior Brexit minister has visited the region today (25 January 2019) meeting Tees Valley Mayor Ben Houchen and business leaders to learn of the post-Brexit opportunities in the area.

Kwasi Kwarteng MP, a minister at the Department for Exiting the European Union, joined Mayor Houchen in a tour of chemical products manufacturer Chemoxy International in Billingham to hear of the importance of international trade and exporting. While at Chemoxy the minister and the mayor took part in a round table discussion with leading figures from the chemicals and process industries.

Chemoxy has had a presence in the Tees Valley since 1868 and employs more than 150 highly skilled workers, having a reputation for technical excellence.

The meeting was followed by a tour of Teesport with senior representatives of PD Ports. There, the Minister learned of the importance that Teesport plays within the region, as the only net exporting area of goods in the UK and one of the country’s largest deepwater ports.

Mayor Houchen said: “We’re are putting the Tees Valley back on the map and the Government has noticed. The visit of another senior minister to listen to the opportunities that are here within the Tees Valley, which voted overwhelmingly for Brexit, is hugely significant.

“As we leave the EU and become an outward, globally trading nation once more, we need to throw our weight behind Teesport and all of our businesses that rely so heavily on exporting from our region.

“One way we can take advantage of Brexit with both hands is with my plans for a free port in the Tees Valley. A recent report that we had commissioned confirmed what I have been saying for a very long time, that a Free Trade Zone will be transformational for our region and vital in a post-Brexit Britain.

“If the Government gets behind our campaign, a Free Port would help this region build on its current strengths in chemicals, steel, energy and logistics and realise our vision to become the most attractive place in the country for high value manufacturing.”

Minister Kwasi Kwarteng said: “I strongly believe that the best way to engage is to come and speak to people about the challenges and opportunities of Brexit in their own areas.

“It was important for me to come to Teesside to let people know that the Government is working hard to get the Prime Minister’s deal through Parliament but we are also preparing for every eventuality.

“With the progress the Development Corporation is making and yesterday’s announcement about the airport it’s clear to me that under Mayor Ben Houchen’s dynamic leadership, Teesside has the skills and dynamism to make a success of our departure from the EU.”