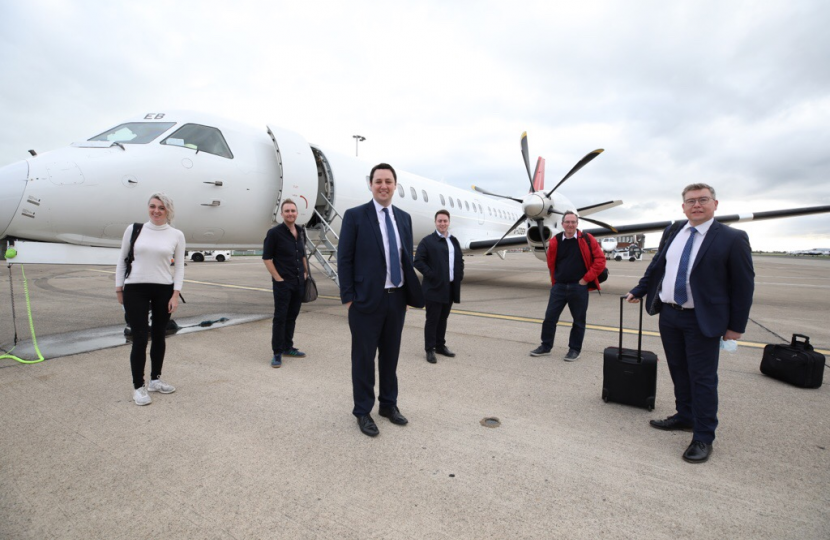 Teesside Airport’s maiden flight to London City Airport departed at 7.15am, connecting the people of Teesside, Darlington and Hartlepool to the capital by air for the first time in a decade. The first flight to Newquay will also depart later this morning.

To mark the occasion, North-East MPs Peter Gibson, Paul Howell, Jacob Young, Matt Vickers and Dehenna Davison all boarded the inaugural flight as they flew into London to begin their week in Westminster, with Mayor Houchen waving them off from the runway.

Eastern Airways’ route to the capital will run daily between Monday and Friday, returning to a twice-daily route on Tuesdays, Wednesdays and Thursdays as soon as demand picks up as expected following the coronavirus pandemic.

This direct link into the heart of London will not only be welcomed by travellers and businesses, but it also strengthens investment opportunities in the Tees Valley, allowing Mayor Houchen to progress further which is recovery plan for jobs – creating good quality, high skilled local jobs for local workers.

The Newquay flights will run once-a-day on Mondays and Fridays, giving people in Teesside, Darlington and Hartlepool the option of week-long or weekend staycations at the holiday hotspot, providing a welcome boost to the tourism industry following the further easing of lockdown restrictions by Prime Minister Boris Johnson on Saturday.

Mayor Houchen said: “It was fantastic to wave off our MPs and other passengers this morning on Teesside Airport’s first flight to London in more than 10 years. This has been a long time coming and despite the difficult circumstances we are recovering from, we can’t shy away from what a significant moment this is both for our airport and our region.

“Investment into our region won’t come on a bus, it will come through our airport terminal. Connecting workers and businesses in Teesside, Darlington and Hartlepool into the heart of London is crucial for my plan for jobs – creating high skilled, good quality local jobs for local people.

“Today’s launch will make our ties with the capital stronger than ever. With the £25m I have invested into Darlington Station, as well as the £22.5m into Middlesbrough Station – which will enable us to introduce direct trains to London from Middlesbrough next year - it has never been easier or quicker to travel to London from our region.

“It is also fantastic that our Newquay flights are starting today just days after the Prime Minister allowed tourism and hospitality businesses to reopen. These regular flights to the hugely popular Cornwall town will let people get to the South-West’s sandy beaches this summer in next to no time, and I hope people safely and responsibly get chance to enjoy them.

“It has been a difficult few months, but our airport is once again back open for business with more routes available, and we will continue to add more when it is safe to do so. Nowhere is the evidence of our recovery more apparent than at Teesside Airport – we will comeback bigger, better and stronger than ever before.”

Darlington MP Peter Gibson said: “I am thrilled to be joining my Tees Valley colleagues on the inaugural flight to London, re-establishing the connection of your airport to London which will continue to ensure that we remain connected to receive investment, jobs and continue to level up our region.

“Ben continues to be our Ronseal politician, delivering on his promises and putting Tees Valley at the top of the political agenda.”

“These flights will be welcomed by so many people who travel in and out of London and by many businesses who rely on good connectivity with the capital, helping us to support jobs across the North-East.

“It was a privilege to be on the first London flight in more than a decade this morning and I’m sure many people across my constituency will be using them in the near future.”

Today’s new flights come following the relaunch of daily services from Teesside Airport to Aberdeen and Belfast City. KLM Royal Dutch Airways will restart its Amsterdam Schiphol route on 3 August, and Mayor Houchen and airport bosses remain in discussions about restarting other routes when the situation allows.

Flight information and details of the airport’s new health and safety measures in line with government guidance can be found at www.teessideinternational.com