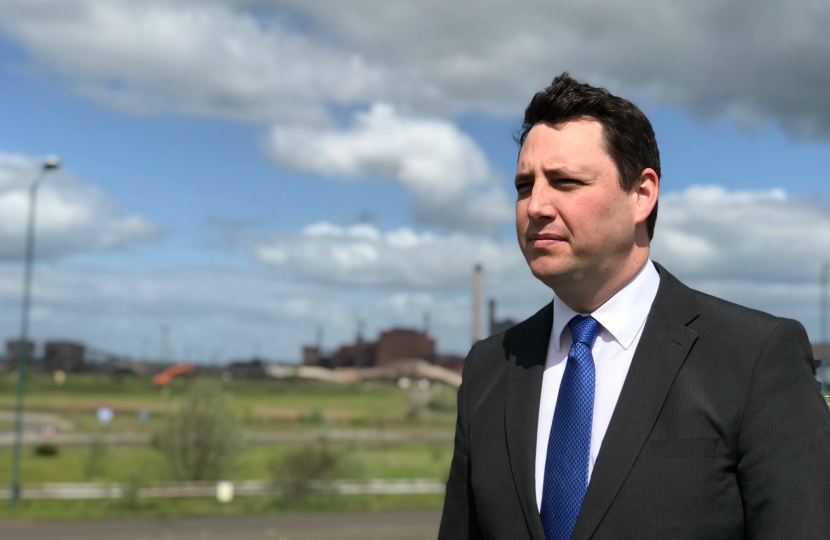 A new Special Economic Area (SEA) will soon be established over the South Tees Development Corporation site after an announcement by Chancellor Philip Hammond in today’s (29 October) Autumn Budget.

Covering the 4,500-acre site - which incorporates the former Redcar SSI steelworks - the UK’s first SEA will give the Tees Valley Mayor and the Development Corporation board the powers to retain business rates to reinvest in developing more of the site, reducing the ask of local taxpayers.

The Special Economic Area is expected to be approved by Parliament this year, with Mayor Houchen pledging to use these new powers to ensure future business rates and rent collected on the site will be reinvested into cleaning up more land for development.

The Mayor said: “I’ve always said that local taxpayers should not have to pick up the entire cost of SSI’s failures.

“While the Government has already committed £137million this year to help with our plans, Special Economic Area status will allow us to go even further to prepare more land for private investment.

“That’s why I have today pledged that rent and business rates collected on this site will be used to remediate even more land. This will reduce our financial ask of taxpayers in the future, and will ensure the private sector rightly picks up some of the slack. It shouldn’t just be left to local people to foot the bill.

“I don’t want to see the money we generate here on Teesside disappearing back to London. If you invest here, and pay taxes here, the money should stay in Teesside.”

The announcement follows a “summer Treasury charm offensive” by Mayor Houchen to ensure Tees Valley gets a good deal from Government in this year’s Budget. This included a meeting with the Chancellor in London, and visits to the Tees Valley by Chief Secretary Liz Truss MP and Exchequer Secretary Robert Jenrick MP.

“My message to the world is come here, invest here, employ here, because we’re on the up. We have available brownfield land, an experienced workforce, the deepest port in England, fantastic road and rail links – and now the powers to ensure taxes paid here are invested into opening up more of the site for development.”

Hailing the news as “the first step to creating a Free Zone in the Tees Valley”, Mayor Houchen said the new Special Economic Area is “as far as the government will go right now” while Britain’s future trading relationship with the European Union continues to be negotiated.

He said: “Once our future trading relationship with the EU becomes clearer, I’ll be submitting a full and comprehensive proposal to Government to ensure our new Special Economic Area is granted all the customs and trade benefits you see with Free Zones around the world.

“Today’s announcement is yet another huge step forward in my mission to create a high-growth, high-wage economy that puts the local workers first.”

£14million to unlock site and create at least 1,500 jobs for local people

The Chancellor also pledged up to £14million to undertake early redevelopment of a part of the site and attract new business and investment. This would take Government’s total commitment on the site in the past year to £137million.

The additional cash announced today will assist in immediate short-term measures to unlock two major metalworks projects. Work will start early next year to get the area ready for the projects, which are worth hundreds of millions of pounds and will bring at least 1,500 jobs for local workers. For one of those projects, the average salary could be as much as £65,000.

This was the only bid made to Government by the South Tees Development Corporation board.

Mayor Houchen added: “It may only be £14million, but this is the exact amount our local authority leaders and I asked for to immediately prepare a specific site for two specific projects.

“The Government hasseen how close we are to landing these huge schemes and I’m pleased to say they have stepped in at the last minute and made this additional money available.

“While today’s announcement takes total Government investment on the site to £137million this year alone, we’re not stopping there.

“Ahead of the Spending Review in spring 2019, we’re preparing another a multi-year, comprehensive bid to ensure we get the right package of support to land even more projects.”

Since it was launched by the Prime Minister in August 2017, the Development Corporation has already seen more than 100 enquiries from around the world, with a potential first-phase investment pipeline of £10billion.

Also announced in the Budget was the devolution of a further £16.5million for the ground-breaking Transforming Cities Fund, which is being used to radically improve public transport across our region. This second wave of funding follows the original £59million, devolved to the Tees Valley in last year’s Autumn Budget.

Mayor Houchen said: “I’ve already committed to earmarking £25million for the transformation of Darlington Station and £20million for the regeneration of Middlesbrough Station from this fund, and this extra announcement will help us go further and faster.

"It is great news for the region and once again shows that, thanks to having a directly-elected Mayor, Tees Valley is no longer an afterthought and we can invest in the priorities that matter the most.”