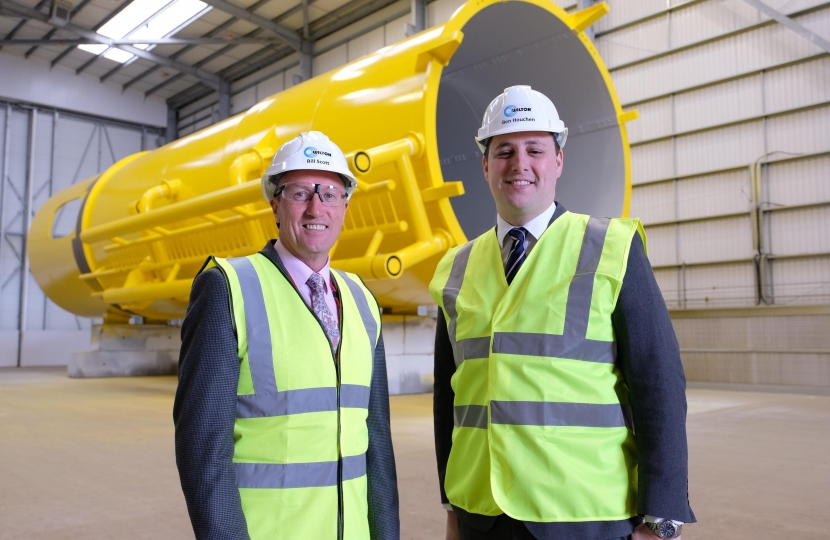 Almost £1billion of Government funding has been announced today for a series of projects which will help boost growth and jobs and transform transport in Tees Valley and beyond.

The cash will help move forward innovation and cutting-edge research, supporting hundreds more businesses to develop and commercialise products and services which will be used to support the £6billion Dogger Bank Wind Farm project – 80 miles off the coast of Redcar.  Once complete it will be the world’s largest offshore wind farm and will connect into a site in Lackenby.

The announcement came as Tees Valley Mayor Ben Houchen joined Cabinet Ministers in Gateshead, where it was revealed Government will work alongside the Tees Valley on a Local Industrial Strategy – one of the first regions selected.

The Strategy will focus on opportunities such as Clean Growth and the circular economy, as well as the region’s other key sectors, Advanced Manufacturing, Chemicals, Process and Energy and Digital.

Commenting on the announcements, Mayor Houchen said: “Over the past year the Tees Valley has secured almost £210million in new funding from central Government. We’re using these funds to clean up the former SSI steelworks site; invest in local rail connectivity; and support unemployed people back into work.

“I’m delighted that the Government has today announced a massive funding boost for our innovators at CPI in Redcar, plus cash to start upgrades to the East Coast Main Line so we’re ready for the new Azuma high-speed trains.”

Nigel Perry MBE FREng, CPI Chief Executive, said: “We are delighted to receive confirmation of this funding.  Our deep understanding of innovation processes, combined with our outstanding technical expertise and state-of-the-art facilities help companies develop, prove and prototype next generation products and processes that deliver highly-skilled jobs and sustained economic growth for the UK.  This support will allow us to continue providing that vital support and position CPI as an increasingly important player role in the Government’s modern Industrial Strategy and Northern Powerhouse.”

Mayor Houchen has previously led calls for the Government to set a date for the auctions, which will allow local offshore wind providers to bid for contracts to power up to four million homes and signals support of up to £557million for the industry.

The auctions will help inward investment and provide certainty to renewable energy businesses in the region, helping them, and supply chain businesses, including Wilton Engineering (pictured), prepare for the benefits this will bring.

Prime Minister Theresa May has confirmed an investment of £780million into the East Coast Main Line, with upgrades set to begin from next year. Tees Valley residents will see faster, more frequent journeys to London with improvements to platforms, tracks, signals and junctions across the route.

The Mayor has been pushing the case for a transformation of Darlington station directly to ministers and Transport Secretary Chris Grayling, and it is hoped these upgrades cement the case for a major overhaul of the station.

Tees Valley Mayor Ben Houchen added: “I’ve already committed £25million to progress plans to redevelop Darlington station, but I’m clear that Government needs to cough up too. That’s why I’m pushing this case relentlessly with ministers to ensure our region gets an even larger slice of the cake.

“Today’s announcements are great news for the Tees Valley. Our businesses, supply chains and travellers set to benefit enormously from the opportunities these cash injections will open up.”