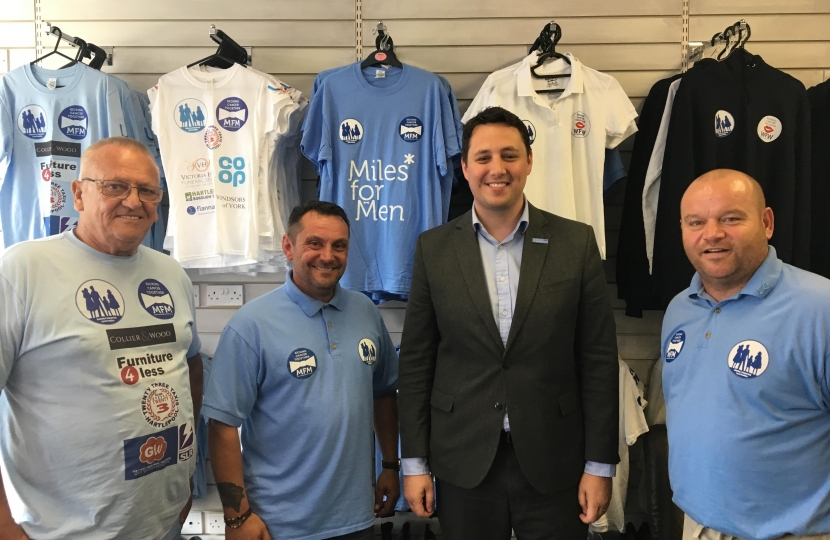 On a visit to Miles for Men and Walk for Women, Mayor Houchen praised the organisation’s “heartening dedication” and hard work as he learned about its history, fundraising drives and plans for the future.

The charity was launched in 2012 by Michael Day Jnr in memory of his father, Michael Day Snr, who lost his battle with throat cancer in 2007 aged 67.

Michael Jnr, also known as Micky, decided to launch a sponsored 5K run for men, which has become a successful annual event supported by other fundraising activity including celebrity football matches and social events.

To date, the charity has raised more than £269,000 for those affected by cancer locally and nationally, which includes a donation of £127,000 to Cancer Research UK and £15,000 to Alice House Hospice.

The team aims to smash their previous fundraising targets this year and secure £300,000 for those affected by cancer, with Micky and fellow fundraiser Kelly Pearson now set to take part in the Great North Run in aid of the charity.

Mayor Houchen said: “I can’t think of a better tribute to Micky’s dad than this inspiring charity and the heartening dedication all the team shows to this important cause.

“We all know someone whose life has been changed by cancer but Miles for Men is making a positive difference locally and nationally. It’s thanks to the generosity of people in Hartlepool that they can continue and I’d ask everyone to see how they can help Micky and the team reach their target.”

Charity founder Micky Day said: “As well as my fantastic dad, I’ve known a lot of great people who have lost their lives far too early to cancer. It’s the memory of these people and their families that keep me focused on making a change.

“I appreciate Ben taking time out of his schedule to visit our charity and I look forward to working with him in the future to help people across the UK and all of our local families who need our support the most.”