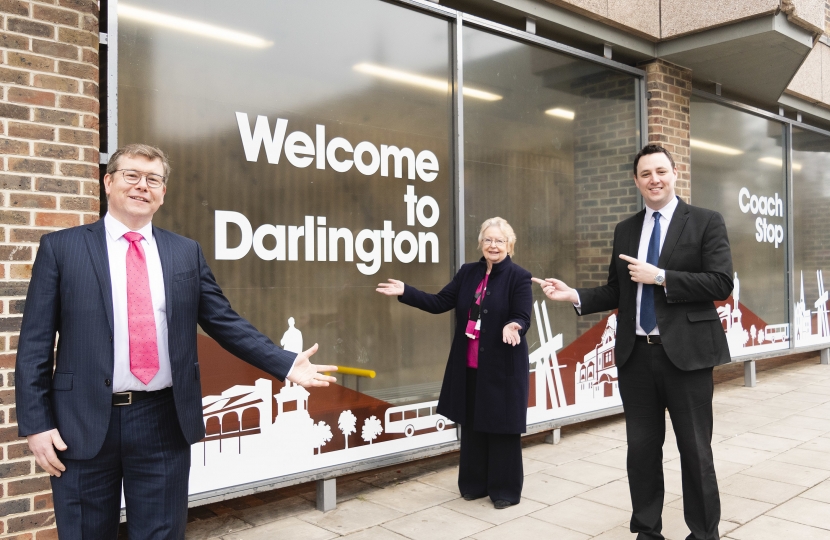 Following the announcement by Chancellor Rishi Sunak in his Spring Budget that 750 senior Treasury civil servants will relocate to a second headquarters in Darlington, today (Tuesday 23 March) the Department of International Trade has revealed that they too will be setting up a new satellite HQ in the town.

The move will see the department, which helps businesses export and grow globally, negotiates trade deals with other countries and helps overseas business come to the UK, relocate hundreds of senior civil servants to Darlington as well as recruiting locally.

By 2030, 500 senior members of the Civil Service from the department will be based in Darlington.

The relocation of trade civil servants, as well as the regular use of the new HQ by ministers, including the Secretary of State, is even more important following the announcement by the Chancellor that Teesside will be home to the UK’s biggest freeport.

The new office will also be home to teams of export and investment specialists, who can provide local businesses with expert support and advice to help them maximise their export potential, boost their trade in new markets overseas and better access major trade markets like India, the US and Japan.

Tees Valley Mayor Ben Houchen said: “This announcement by the International Trade Secretary puts Teesside, Darlington and Hartlepool at the centre of UK trade policy like never before. While other regions talk about Global Britain we’re getting on and delivering it. As home to the UK’s biggest freeport having the Government’s trade arm here will bring more investment, more businesses and more jobs.

“We are already seeing the benefits of having the UK’s biggest freeport with GE Renewable Energy announcing the UK’s first factory to build blades for offshore wind turbines, creating 750 direct jobs and a further 1,500 in the supply chain. We were only able to secure GE because we got a freeport in the Budget. These are the first of thousands of good-quality, well-paid jobs the Teesside Freeport will deliver.

“Make no mistake, the Department of International Trade is only coming here because we were able to secure the Treasury. At the time Rishi made the announcement in his Budget, I said the relocation of a huge chunk of the Treasury to Darlington wouldn’t be the last announcement of a Government department moving here, and neither will today's about DIT.

“It’s not just Civil Service jobs that are coming here, we’re attracting interest from a host of major financial, law and accountancy firms who are now looking for offices here because they want to be close to Government. It’s clear Darlington is entering a new boom time.

“Having Treasury and now the Department of International Trade coming here is not only good for the Government, but it is also good for local jobs. We are already working with the Treasury to make sure local people are prioritised for the jobs that are created, and I look forward to doing the same with Liz Truss and her team.

“With two Government departments now on our doorstep and senior civil servants living here, our children will grow up with the confidence that a top government job is within reach and that such a top career can be built right here in our great region.”

International Trade Secretary Liz Truss said:
“I’m determined to use UK trade policy to benefit every part of the UK. These Trade and Investment Hubs will help this country to an export and jobs-led recovery.

“They will mean we can channel investment into all corners of the country, and that exporters – whether they’re selling Scotch beef, Welsh Lamb or cars made in the North of England – have access to the expertise they need to sell into the fastest growing markets.”