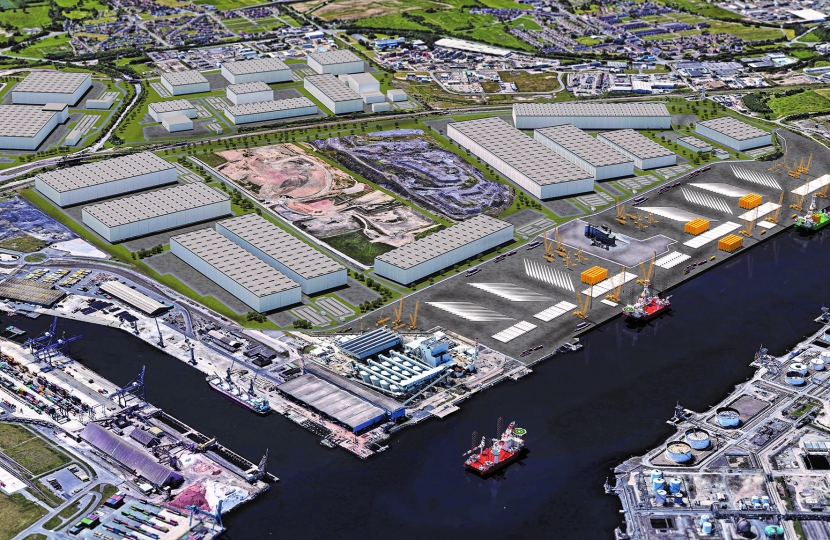 Tees Valley Mayor Ben Houchen has today (22 March) welcomed news that plans to develop a new state-of-the-art quay at the Teesworks site have been given the green light, creating 100 jobs during construction.

The new South Bank Quay will completely transform a 1km area along the River Tees, providing global firms with direct access into the heart of 500 acres of development land, and thousands more across the wider Teesworks site, straight from the North Sea.

The news comes just 11 days after it was revealed that GE Renewable Energy, a global leader in the manufacturing of offshore wind turbines, will build the UK’s first factory for turbine blades at Teesworks. Once up and running the state-of-the-art factory will create 750 direct jobs and a further 1,500 in the supply chain.

The blades produced by GE Renewable Energy will be supplied to the Dogger Bank wind farm, around 80 miles off the coast which, when completed in 2026, it will be the world’s largest offshore wind farm and will be capable of powering up to six million homes.

The decision my GE Renewable Energy to build their new factory in Teesside, rather than France, is not only testament to the skills of local workers, but it also shows how critical is was that the mayor’s plans for the UK’s biggest freeport were given the go ahead by Government in the Spring Budget. With getting freeport status a key element of securing the company for the UK.

The plans for the new South Bank Quay will see the demolition of the existing wharf, jetties and other structures. The River Tees will also be dredged to deepen parts of the river so that larger vessels can be accommodate and to create a berthing area where they can dock.

The South Bank Quay scheme is being backed with £20million Mayor Houchen secured from the Government’s new Ports Fund.

Construction of the new quay will start in August with tenders for the work going out in the next few weeks. As part of the work 100 jobs will be created with applications being managed through the Teesworks Skills Academy. Interest can be registered at teesworks.co.uk/skills-academy.

Mayor Houchen said: “This is a huge milestone for the redevelopment of the Teesworks site. The 2,250 jobs that will be created by GE are just the start as this new state-of-the-art heavy lift quay will unlock thousands more jobs. It will mean the global companies that move into the 4.5million sq ft of manufacturing space we have permission for along the River Tees, creating 9,000 good-quality, well-paid jobs, will have quick and easy access to the river and global trading routes.

“Developing the clean energy sector across the region is a key part of my plan for jobs and from offshore wind to carbon capture and developing hydrogen as a fuel; Teesside, Darlington and Hartlepool are leading the way in a clan energy and the clean jobs revolution for local workers.

“We’re continuing to breathe new life into the Teesworks site, with a number of other massive milestones on the horizon, which will bring more investment, more businesses and more highly skilled jobs to our area for people across Teesside, Darlington and Hartlepool.

“In the last few years, we have made great progress, but there is so much more to do, let’s not risk all we have achieved and go back to square one.”

Leader of Redcar & Cleveland Council, Cllr Mary Lanigan, said: “This is more fantastic news for the region and the reason why companies like GE Renewable Energy have agreed to invest in the site and build a new multimillion pound wind turbine blade manufacturing factory which will create thousands of jobs for local people.

“The construction of the South Bank Quay will help make the area the UK’s premier offshore wind location and give companies access to the biggest wind farms across the world.

“This investment in new infrastructure at the port shows our dedication to ensuring the immense economic potential of the Teesworks site really does become a reality.”