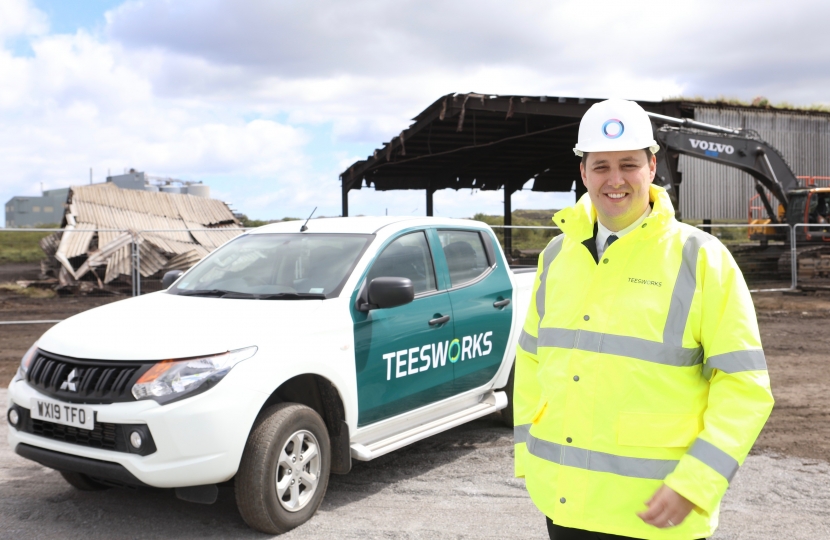 Tees Valley Mayor Ben Houchen’s plans to redevelop Middlesbrough Station and construct a new and improved entrance to the newly-named TeesWorks site have been given full backing thanks to a multi-million pound commitment from Government.

The investment is part of £17.4 million commitment from the Government’s Getting Britain Building Fund, which Prime Minister Boris Johnson announced earlier this year and will see money spent on three major projects across the Tees Valley, which aim to be completed by the end of March 2022.

A total of £9.65million has been earmarked through the Fund towards the Mayor’s £35million redevelopment of Middlesbrough Station. This includes part-funding the extension of an existing platform to allow it to accommodate longer trains, alongside the construction of commercial floorspace.

This ensures the whole project is now full funded and will allow for increased services, including a direct London train by the end of 2021, allowing the region to be better connected to the capital than ever before.

A new gateway entrance for TeesWorks in Redcar will receive £4.1million of funding. TeesWorks was last week unveiled as the new name and brand for the 4,500-acre South Tees Development Corporation. At the launch, Mayor Houchen announced that 19 demolition projects will start on site over the next 12 months, generating nearly 400 jobs and with a total investment of almost £400m.

The entrance will include dedicated induction, training and development spaces, and will accelerate investment into the wider site and help realise its ambition as the UK’s largest industrial zone, improving its appeal to international investors and local people alike.

And a further £3.65million has also been allocated to the second phase of development of Darlington’s Central Park, home to CPI’s National Biologics and Manufacturing Centre, and Teesside University’s National Horizons Centre – both centres of excellence in the biologics and life sciences sector.

This will create 2,370sq m of high-quality business accommodation including lab and office space, resulting in the creation of 150 new jobs and strengthening the region as a national centre of excellence in bio pharmaceutical and chemical processing businesses.

Mayor Houchen said: “This is another vital commitment from Government in its levelling up agenda, proving that our region won’t be left behind and we are getting the attention we deserve.

“As we seek to  rebuild our economy following the coronavirus pandemic, and also help lead the way for the rest of the UK, we need to unlock these projects and capitalise on new opportunities quicker than ever, and this cash will give us the means to do that.  The very reason I’ve secured this £17.4million funding is because these schemes are ready to go, and will create a huge and direct impact across our region.

“This final funding for the Middlesbrough station redevelopment will sit alongside the money I have already pledged to the scheme and ensures this project is now fully funded. This means we can get on with increasing the frequency of services and train routes and introduce the first services between London and Middlesbrough in decades – a key part in attracting investment in the region and my plan for jobs.

“Just days after I launched TeesWorks on our former steelworks site in Redcar, we’ve secured more Government investment to start developing our shop window to the world that will wow investors from across the world. We’ve got a new name, and this will give us a new start with our hugely ambitions plans for the site.

“Organisations operating in the vital field of life sciences and biologics are already located in Darlington’s Central Park. With this investment we can unlock more top-quality workspace to attract further biopharmaceutical and chemical processing businesses and the high quality, well paid jobs that go with it.

“Backing these projects is crucial for my plan for local jobs for local people in Teesside, Darlington and Hartlepool. The Government has proved once again it is listening and making sure our comeback is well and truly on.”

Minister for Regional Growth and Local Government Simon Clarke MP said: “We want to build back better to fuel a green economic recovery across the country by investing in infrastructure, creating jobs and building the homes people need.

“That is why, we are investing £64.4m in shovel-ready projects in the North East through our £900 million Getting Building Fund. This funding will unlock homes, create new jobs and deliver investment in commercial and green spaces and a much-needed boost to the local economy.”

Redcar MP Jacob Young added: "Once again this Government has shown its commitment to Teesside, powering our national recovery.

"The new Teesworks site is the single biggest development opportunity in the UK, and by committing over £4 million for the work on the site, the government is getting the ball rolling on the construction.

"Once the key infrastructure is in place, Teesworks will be able to open up to the world and provide thousands of jobs for the people of Teesside.

"This is fantastic news for Teesworks, for Teesside and especially for the people of Redcar and Cleveland."