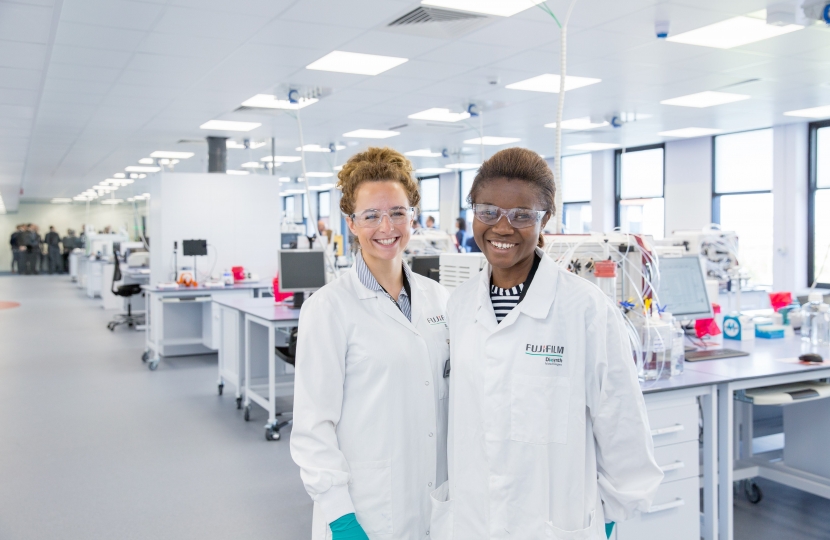 The investment, which will aid the development of FUJIFILM Diosynth Biotechnologies’ £14.5million BioCampus project at its site in Billingham, is expected to lead to the creation of up to 50 high-value jobs and add £4million per year to the regional economy.

The development will see the creation of 4,000sqm of high-specification office space which could also be converted into laboratory space, primarily used for manufacturing and business support for the existing 250 staff.

FUJIFILM Diosynth’s biopharmaceutical science and technology operations, which include recombinant protein production, position it at the leading edge of a key Tees Valley sector. It has seen considerable growth in the region, expanding its Stockton site over the past 20 years, from 90 employees to around 600 today. Last year, it opened a £7million state-of-the-art biotech facility at Redcar’s Wilton International.

FUJIFILM UK’s vision for the site is to create a thriving bioscience campus, with a phased master plan for the creation of this. Phase one will be supported by this cash and the vision for two further phases could see the creation of a further 200 jobs, adding even more value to the economy.

Tees Valley Mayor Ben Houchen, said: “FUJIFILM’s Billingham plant is going from strength to strength. It provides well-paid jobs for local people, and there is huge potential to expand this valuable asset even further.

“In May I led a delegation as part of the Tees Valley’s first trade mission to the Far East, where I met some of FUJIFILM’s top executives in Japan to thank them personally for putting their faith in our economy, and outlined the fantastic opportunities for growth in this region.

“I’m pleased these plans have come to fruition and this multinational company and household name, which plays such an important role in the Tees Valley, has again shown confidence in our region. I look forward to working with them in the future to grow their business even more.”

Paul Found, Chief Operating Officer at FUJIFILM Diosynth Biotechnologies, Billingham, said: “Our operations in the Tees Valley continue to provide a foundation for the growth of FUJIFILM Diosynth Biotechnologies as a leading provider of development and manufacturing services in the global biotechnology sector. We are delighted that the Mayor and TVCA support our mission to advance tomorrow’s medicines and provide truly life changing therapies to patients world-wide. The TVCA funding reinforces our internal investment strategy that seeks to further develop and grow our organisation with formal conclusion of the BioCampus Phase 1 funding approval anticipated in January 2019.”