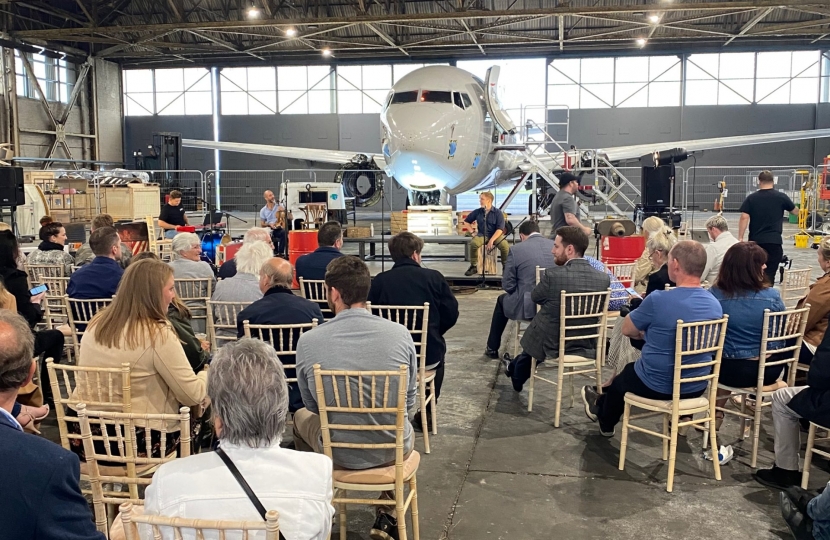 A new play celebrating the region’s rich iron and steelmaking heritage has held its premiere at Teesside International Airport.

Steel and Iron, written by John Hoggarth, is based on a concept by Middlesbrough-born producer Katie Gibson of Twenty Seven Productions, which staged the show.

The story follows a motley crew of people all from different backgrounds but united by the town of Middlesbrough, and asks: “What happens to a place that is defined by its heritage and industry, when those are taken away from it?”

A raft of local talent added their expertise to the show, with top-ten charting Middlesbrough singer-songwriter Alistair Griffin composing the music and songs, and brother and sister duo Joe and Helen Hammill, AKA Cattle and Cane, and Maximo Park’s Paul Smith also lending their skills.

The response to the show was fantastic, with 120 people – including the Tees Valley Mayor Ben Houchen, artist and composer Alistair Griffin, and some of the region’s business leaders – getting a sneak peek of the show before it hits the big stage. In particular, the audience praised its sensitive handling of the subject matter, its fantastic songs and the way that huge pride in our region shone throughout.

Tees Valley Mayor Ben Houchen said: “We were delighted to welcome the cast and crew of Steel and Iron for a brilliant production which had our audience glued to their seats.

“In a week that’s seen the work begin to demolish Redcar Blast Furnace get under way, emotions are running high and our heritage is front-and-centre in people’s minds. It’s great that Teesside International could think outside the box and play our part to recognise our region’s legacy by partnering with Twenty Seven Productions so Katie can stage this piece.

“But like what’s happening on the Teesworks site, we’re also looking to the future and the brilliant opportunities that will be able to transform our airport, and our area.”

Producer Katie Gibson said: “The premiere at Teesside Airport was a huge success, with our talented cast giving their all to do the region’s history of iron and steelmaking proud.

“I’d like to thank the airport for our partnership, which has helped get Steel and Iron off the ground, especially how difficult the previous 18 months have been for us all, and how that impacted the development of the show.

“The feedback so far has been excellent and I’m over the moon with the finished product. Everyone has really pulled together to help support our vision and I can’t wait to bring the piece to an even wider audience of local people soon.”

The show, due to take place in August, has been postponed due to circumstances beyond the control of Twenty Seven Productions. More details on the new dates to see Steel and Iron will be coming soon.

Tees Valley Mayor Ben Houchen has today (10 August) launched a new campaign to encourage young people to consider future careers in the Tees Valley, as students across the region learn their A level and BTEC results.