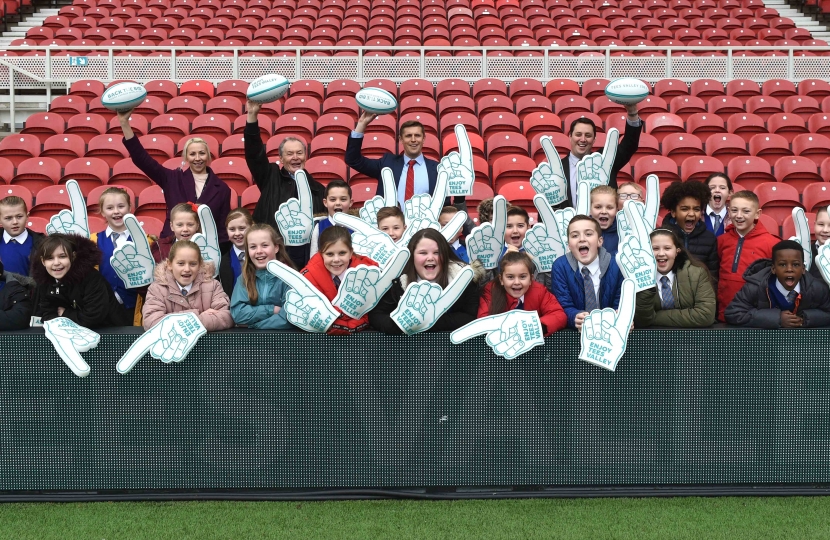 Tees Valley has been confirmed as one of the host venues for the Rugby League World Cup 2021, it was announced today.

It will host part of the major international competition for the World Cup in autumn 2021, following a successful bid led by the Tees Valley Combined Authority.

Around 100 people involved in the bid, along with pupils from local schools and a rugby league team, heard the news at an event at Middlesbrough Football Club’s Riverside Stadium as the announcement was broadcast live by the BBC from Manchester.

The bid could give the region an economic boost of up to £8million, attracting tens of thousands of global rugby fans to the area. This winning bid will also work in support of Tees Valley’s application to be named UK City of Culture 2025.

Tees Valley Mayor Ben Houchen said: “This is a major coup for the Tees Valley, backed by a fantastic bid that showed why we would be a perfect fit for the Rugby League World Cup. We’re already punching above our weight and this will see our region beamed into the living rooms of sports fans across the world and boost tourist numbers.

“The last time we had a World Cup match in the Tees Valley was 1966, when North Korea beat Italy at Ayresome Park. Now, 55 years later, sports fan will be able to come through the famous Ayresome Gates, this time at the Riverside, once again to watch a World Cup Game.

“It is fantastic news off the back of the Great CityGames coming to Stockton later this year.

“It will also help us to grow the sport here in Tees Valley – which we know from our feedback from the organisers of the World Cup, has played a key part in our successful bid.

“Now our local airport will return to public ownership, I expect many thousands from around the world to travel through Teesside International in 2021.”

The region has previous experience hosting international sporting teams, with the New Zealand All Blacks head coach praising Darlington’s Mowden Park after it hosted the rugby team in 2015.

The successful bid also outlined Tees Valley’s location, exceptional facilities and key venues including the Riverside Stadium and Northern Echo Arena. It also highlighted the region’s commitment to creating a lasting legacy for the game.

Jon Dutton, Chief Executive of Rugby League World Cup 2021, said: “We’re extremely excited to see the Riverside Stadium in Middlesbrough host a men’s fixture at the Rugby League World Cup 2021. We’re looking forward to bringing world-class rugby league to the region, the birthplace of Captain James Cook. The Tees Valley partners put together a compelling bid and it will be fantastic to see the community having the opportunity to engage with the tournament over the next 1,000 days.”

The news comes less than a week since the Tees Valley Mayor and Combined Authority approved plans to bring Durham Tees Valley Airport back into public ownership, saving it from closure in 2021. It is now likely to play a significant role in bringing thousands of international visitors to the region.