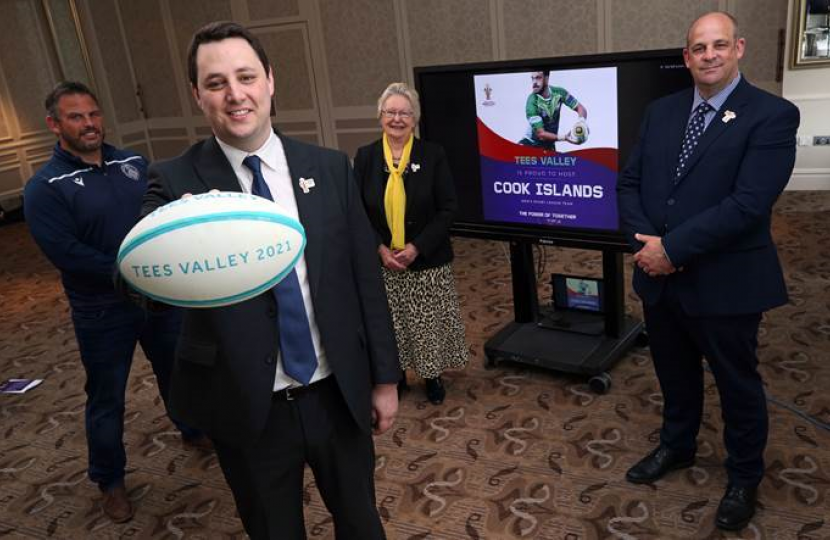 The team will be based at Darlington’s Rockliffe Hall hotel and train at the town’s Mowden Park arena less than ten minutes away, while they compete in the seven-week tournament.

Tees Valley Mayor Ben Houchen was joined at Rockliffe Hall by its Managing Director Jason Adams and Mowden Park’s Danny Brown to welcome the announcement, made to mark 500 days until the start of the tournament. The event could give Tees Valley an economic boost of up to £8million, attracting tens of thousands of international rugby fans to the area.

The Cook Islands is a self-governing country in the South Pacific Ocean made up of 15 islands. It was named by Russians after Middlesbrough-born Captain James Cook, who visited many of the group’s southern islands.

Middlesbrough’s Riverside Stadium will also host a game during the major international competition, with Rugby League World Cup expected to release the fixtures throughout July, with tickets available on pre-sale from September.

Tees Valley Mayor Ben Houchen said: “I’m delighted to be welcoming the Cook Islands to our area for the duration of the tournament, where they’ll be able to take advantage of the exceptional facilities and venues that helped us win our hosting bid.

“As well as training and staying here, it will be fantastic to see the team out and about, engaging with our local communities and the next generation of fans to build a legacy of rugby league across Teesside, Darlington and Hartlepool. On top of this, I’m sure they, and our game, will draw thousands of fans from far and wide.

“In this difficult and unprecedented time, we need something to look forward to and 2021 is shaping up to be another fantastic year of events that show we’re punching above our weight. From the rescheduled Killers gig at the Riverside and Tom Jones concert at Darlington Arena to the rugby league world cup fixture itself, we’re continuing to get noticed on a global scale.

“I hope they are as excited to visit as we are to have them here!”

Jason Adams, Rockliffe Hall’s Managing Director, said: “It’s a pleasure to be involved in the Rugby League World Cup and we’re delighted to now find out that we’ll be hosting the Cook Islands. It’s been a challenging time for everybody so like Ben says, it’s great to have such a big event to look forward to next year. It will be the ideal opportunity for us to showcase our region and everything it has to offer. We look forward to welcoming the squad to Rockliffe Hall.”

Lee Rust, Darlington Mowden Park’s Managing Director, said: "We're delighted with the news that another global event has made the decision to come to Darlington and the Tees Valley, which is a marker of the fantastic facilities and offering that we have as a region. We look forward to welcoming the Cook Islands and I’m sure the local sporting community will make them feel at home throughout the tournament. 2021 really is shaping up to be an exciting year and this can only add to the list of events to look forward to."

Jon Dutton, RLWC2021 Chief Executive, said: “Today marks another hugely exciting milestone on the road to Rugby League World Cup 2021 as we celebrate 500 days until the opening fixture at St James' Park in October next year.

“Cook Islands’ story is a fantastic one, which I am sure will contribute to them becoming very popular with attendees in 2021. They have brought tremendous passion and vibrancy to rugby league already. As we know, the people of the North East are sports mad and some of the most welcoming in the country, so I am sure the whole of Tees Valley will be excited to adopt the Cook Islands squad as their own.

“Our refreshed tournament identity and today’s nation base announcement can serve as an exciting reminder for the people of Tees Valley of what’s to come in 2021 as we continue to build momentum towards what promises to be the biggest and best Rugby League World Cup in history.”

Teesworks, the UK’s largest Industrial zone, has today revealed its brand-new gatehouse and entrance that will wow would-be investors from around the world when they arrive.