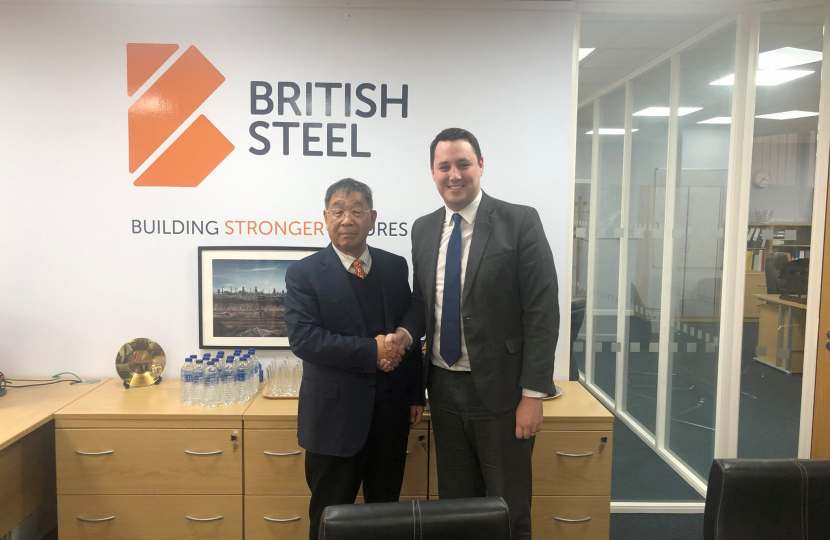 Tees Valley Mayor Ben Houchen has been congratulated by the Chinese Ambassador to the UK for his role in saving British Steel and securing thousands of jobs.

Liu Xiaoming tweeted this morning (November 12) thanking Mayor Houchen in helping to secure a deal for British Steel, which will protect hundreds of Teesside jobs at Skinningrove and Lackenby.

The Chinese Ambassador said: “Congratulations to Mayor Houchen and his team. We all share your joy. I wish British Steel and Jingye Group every success in the days to come.”

In response, Mayor Houchen said: “I have worked really hard with the company, Government and the trade unions to be able to find a solution for British Steel and protect jobs, especially the hundreds of Teesside workers.

“BUT the real thanks should go to the workers who have remained committed and carried on doing a brilliant job despite all of the uncertainty for them and their families.

“If it wasn’t for them staying committed in difficult circumstances, a deal would not have been agreed, but because they did, Jingye have been able to see that British Steel still makes the best steel in the world.”

The Chinese Ambassador also echoed the praise from Mayor Houchen to former Business Secretary Greg Clark, describing him as the “unsung hero” in the deal.

He said: “I cannot agree with Mayor Houchen more that Greg Clark is the unsung hero in the deal. I was deeply impressed by his enthusiasm and hard-working spirit. He went to China personally to promote the deal. This is what we need in building strong China-UK partnership.

Mayor Houchen added: “None of this would have been possible had it not been for the hard work and dedication of Teesside man Greg Clark when he was the Secretary of State.

“It is also important to note the work of Andrea Leadsom in getting this deal done and everyone involved in the British Steel Support Group. It shows what can be achieved when we put party politics aside to get the best for the Tees Valley.”