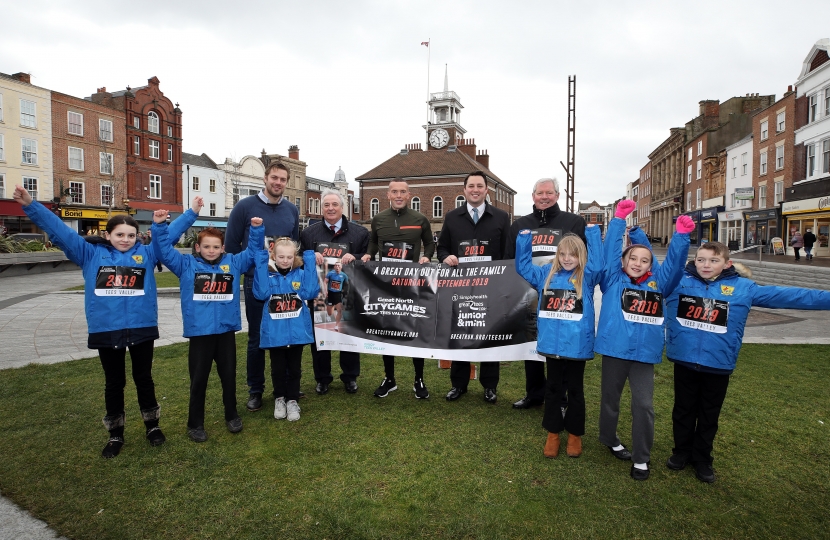 Gold medallist sprinter Richard Kilty and former Olympic long jumper Chris Tomlinson were on hand to urge people to get involved in a fantastic weekend of athletics.

The event, which includes the Simplyhealth Great Tees Junior and Mini Run for children, is being held alongside the Great North CityGames, a world-class athletics event set to take place in the heart of Stockton for the first time on Saturday 7 September. They are both part of the wider Simplyhealth Great North Run weekend, the world’s biggest half marathon, which takes place on Sunday 8 September on Tyneside.

Stockton’s High Street will be transformed to host talent from across the world for the Great North CityGames, as they compete against a host of home-grown athletes, including Richard. Thousands of sports fans are expected to turn out to watch the event, which is also broadcast live on BBC One.

The public can also be part of the action by signing up to the Great Run Company’s Simplyhealth Great Tees 10k, and Tees Valley Mayor Ben Houchen, Stockton  Borough Council leader Cllr Bob Cook and children from Tilery Primary in the borough were also involved in spreading the word.

The Great North CityGames is being brought to Tees Valley thanks to a partnership between the Great Run Company, Tees Valley Combined Authority and Stockton-on-Tees Borough Council.

Brendan said: “After ten successful years in NewcastleGateshead, we decided to widen the impact of the Simplyhealth Great North Run weekend and take the Great North CityGames to the Tees Valley.

The location is a natural fit for the elite event following the success of last year’s Great North CityGames Elite Mile, which was held in Stockton alongside the mass participation 10k. Last year saw us launch the 10k to huge success, and I know the town has experience of putting on great events with its annual Riverside Festival.

“Whether people want to get involved by taking part in the Simplyhealth Great Tees 10k, or just come along to watch impressive athletes at the top of their game, it’s sure to be an event to remember.”

Richard said: “When I was a kid, I always dreamed of being able to compete in my home town. Words can’t describe how happy I am now to be competing not just with my people across Teesside but in Stockton, where I grew up and almost right by my front door.

“The Great North CityGames and Simplyhealth Great Tees 10K are a great opportunity for us and I ask everyone to show their support by joining up to the 10k.”

Chris said: “I started competing in the Tees Valley as a child so it’s very special to see that we’ve managed to land a world-class event.

“Having competed in the Great North CityGames in the past I know what a special event it is. I hope it, and the Great Tees 10k, goes on to inspire more young people from the area to take part in athletics and go on to lead the next generation of our sportspeople.”

Mayor Houchen said: “This launch comes just a fortnight after it was announced that we’re a host venue for the Rugby League World Cup 2021. The Great North CityGames is yet another feather in the cap for our area, and we’ve got other massive events like concerts by Take That and Jess Glynne to look forward to.

“Just a few years ago, we wouldn’t have had the confidence to even think we could be home to these big-ticket events, but this just goes to show that the Tees Valley is becoming a major cultural destination. As well as an opportunity to showcase ourselves, events like these boost visitor spending which helps improve the economy and support our vital local businesses.”