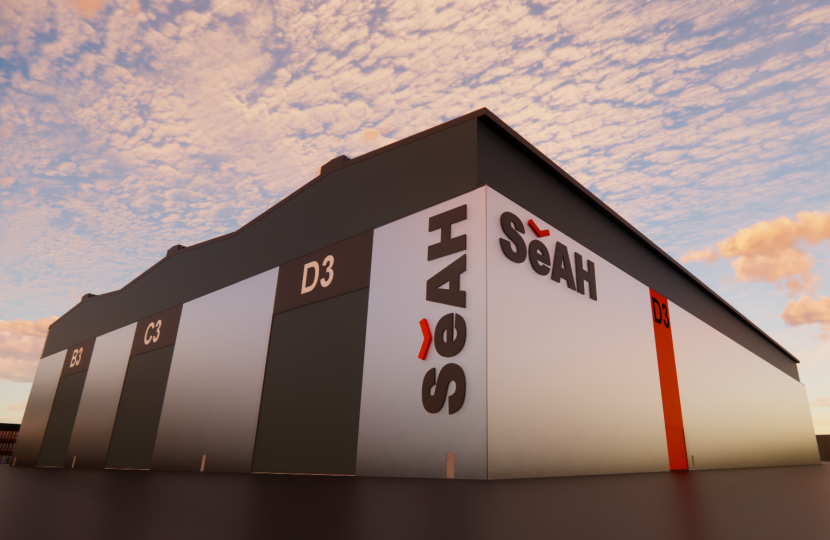 Plans have now been submitted for the 40-metre-tall building, which will redefine the Teesside skyline and stand as tall as Stockton’s Infinity Bridge at its peak – or ten double-decker buses.

The facility, part of the Teesside’s Freeport, will sit on a 90-acre site adjacent to Teesworks’ £107million heavy-lift South Bank Quay. Its 1.13million sq ft footprint is four times the size of the Riverside Stadium and, when complete, will be the largest facility of its type in the world.

The factory services the offshore wind sector, producing monopiles that form the foundations of offshore wind turbine construction, will create 1,500 jobs in the supply chain and during construction when work begins in July. Once operational, a further 750 roles will be created.

SeAH Wind are also set to hold an event to meet local supply chain companies to let them know how they can get involved in the work, being led by construction consultants K2 Consultancy, on April 20 at Sedgefield’s Hardwick Hall.

Tees Valley Mayor Ben Houchen said: “2022 is our year of construction and we are rebuilding a new skyline for Teesside – one that looks to the future and is creating hundreds of well-paid jobs in the cleaner, healthier and safer industries of tomorrow.

“It’s fantastic to see that both SeAH Wind and its construction consultants, K2 Consultancy, are committed to employing local workers and using the region’s talent and suppliers to deliver the facility. These aren’t just fancy pictures, they’ll start to be a reality, with spades in the ground coming in just a few short months.

“This latest move once again proves this scheme, along with other innovative projects taking place at Teesworks, are not pie-in-the-sky proposals. They are very real developments going ahead right now and delivering for local people.”

President & CEO of SeAHSteel Holdings, Joosung Lee said: “After acknowledging a solid and stronger business relationship, SeAH Wind and Teesworks have decided to set out a long journey together.  I am sure that the remaining work will go smoothly with the support of TVCA and our local partners.  Bringing UK’s first monopile manufacturing facility is a very meaningful and significant project to the UK offshore wind industry.  We will make every effort to produce visible outcomes in every stage of the development.”

Cllr Mary Lanigan, leader of Redcar & Cleveland Borough Council, said: “This is yet another example of positive progress being made in our area; in terms of both the creation of jobs, and the future of industry in the north east. 1500 supply chain jobs and 750 positions upon completion of the project is a significant number and we are proud to be becoming a leading area for clean, renewable energy.”