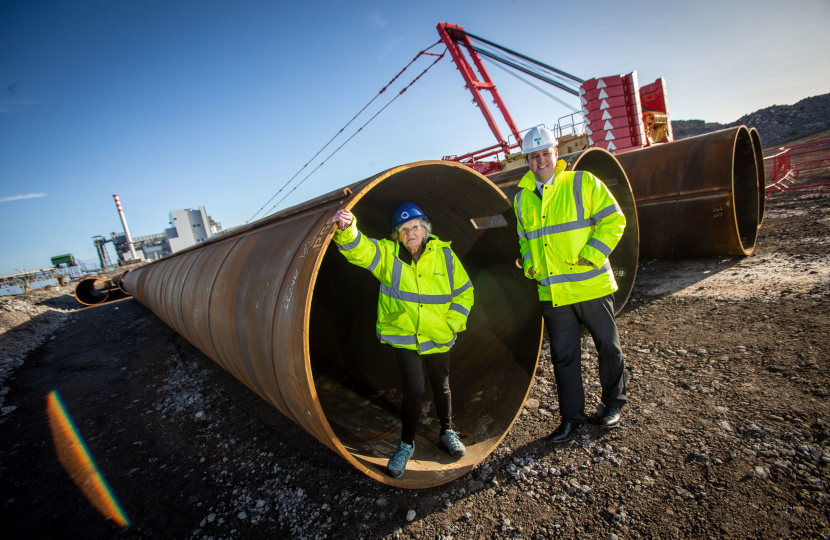 Work to deliver the South Bank Quay has today (31 January) reached a major milestone with mammoth steel piles being driven into the ground in order to strengthen the quay wall.

The hollow metal pipes are more than 80ft long and 6ft wide, and are so big that a 5ft 8in person could easily walk through them.

A total of 350 piles will be installed to create the 15-acre hardstanding and logistical space, with two to three driven in each day over a four-month period. Local firm Hall Construction has carried out earthworks ahead of UK contractor Graham, which is also building the nearby Teesworks Skills Academy on the site, performing the construction.

The 1km quay will support ambitions to make the site the UK’s premier offshore wind hub and will be used by GE Renewable Energy to load out and ship its cutting-edge wind turbine blades to Dogger Bank wind farm when it establishes its facility adjacent to the quay. The quay also forms part of the wider 4.5m sq ft of advanced manufacturing and industrial space set to be built on 450acres of land next to the wharf.

The project was recently awarded £107million of funding in the UK Infrastructure Bank’s first ever investment, with 200m of its construction due to be completed by December, ahead of the full phase one 450m by March 2023.

Tees Valley Mayor Ben Houchen said: “This is the next stage in work to create a quay central to our world-class offshore manufacturing site and shows just how quickly we’re moving to build things up and not just knock things down.

“We’re not losing our momentum and these projects are progressing fast so we can capitalise as soon as possible on the site, the Teesside Freeport and all of the opportunities we will bring. This includes GE Renewable Energy, which will use this quay for its 107m Haliade X blades, and it will be an attractive asset for other offshore firms looking for a new base too.

“This time next year, you’ll see a much-transformed site. All of the major structures across our 4,500 acres will long have been brought down, the first phase of the quay will be weeks away from completion and we’ll be ready to go even further in bringing the good-quality, well-paid jobs the people of Teesside, Darlington and Hartlepool deserve.”

Cllr Mary Lanigan, leader of Redcar and Cleveland Borough Council, said: “Some exciting transformations will be taking place over the coming months, as this huge project is developed further still. This is a fresh start for industry on Teesside and the beginning of a whole range of career possibilities for large numbers of our people.”

Paul Scott, contract director at Graham’s civil engineering division, said: “It’s fantastic to see the beginning of the steel piling at South Bank Quay, which will allow our team to begin main construction work on the project shortly. This milestone is the first sign of the new quay beginning to take shape, and is an exciting development for the scheme.

“Once complete, this transformational development will play a huge role in the region, providing fantastic employment opportunities and world class offshore wind facilities that will put Teesside at the forefront of the sector.”