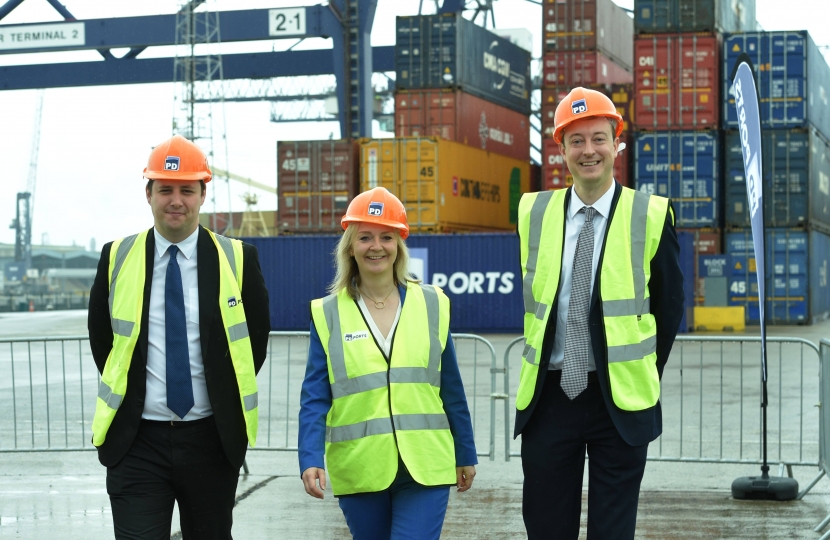 Tees Valley Mayor Ben Houchen has welcomed today’s (August 2) Government announcement that a Free Ports Commission will be established to create up to ten such zones in across the UK.

Secretary of State for International Trade Liz Truss MP joined Mayor Houchen on a visit PD Ports Teesport to reveal the news of the Commission, which will invite ports and airports across the UK to bid to become one of up to ten Free Ports across the country. The Minister also met leaders of local exporting businesses to discuss the potential economic benefit of Free Ports.

The move comes following a 19-month campaign pushing for a Free Port in the region led by Mayor Houchen, which included including lobbying Whitehall, inviting ministers to the area and publishing a 100-page ‘White Paper’ setting out how these new low-tax zones would work in the UK.

Prime Minister Boris Johnson is a firm supporter of the policy saying Free Ports are an “excellent way to boost business and trade”. In his first speech as Prime Minister on the steps of Downing Street, Mr Johnson announced he would roll out the policy nationwide.

The Mayor’s 100-page ‘White Paper’ stated that a Free Port in the Tees Valley could provide a net boost of £2billion to the UK economy and up to 32,000 new jobs over 25 years.

Mayor Houchen said: “After a 19 month campaign, I’m delighted the new Government has sat up, listened to the people of Teesside and announced 10 new Free Ports across the UK.

“Free Ports have the potential to turbocharge our regional economy after Brexit, bringing desperately-needed jobs, growth and investment here and making us a magnet for even more international investment. This is a game changing opportunity to reshore manufacturing jobs we haven’t seen in this country for decades to the former Redcar steelworks site.

“As we leave the EU and reclaim our place as an open, outward-looking trading nation once more, a Free Port would be beyond transformational for our region, helping us build our current strengths in chemical processing, energy and logistics industries.

“Every single independent report confirms that we all see a major boost as we realise our vision to become the most attractive place in the country for high value manufacturing.

“Last week we welcomed the US Ambassador to the UK and today our campaign to secure a Free Port for Teesside has been successful. Slowly but surely our region is receiving some much-needed positive attention.

“Teesport played a crucial role in this nation’s historic trading past, and is key to our great trading future after we leave the European Union.”

Trade Secretary Liz Truss MP said: “Freedoms transformed London’s Docklands in the 1980s, and Free Ports will do the same for towns and cities across the UK. They will onshore enterprise and manufacturing as the gateway to our future prosperity, creating thousands of jobs.

“We will be free to create Free Ports without meddling from Brussels after we have left the EU on October 31. I look forward to working with the Commission to create the world's most advanced Free Port model and launch the new ports as soon as possible.”

Jerry Hopkinson PD Ports’ Chief Operating Officer and Vice Chairman and Tees Valley LEP Member added: “In recent years Teesport, coupled with one of the deepest rivers in the UK has attracted over £1bn of new investment to the Tees Valley.

“PD Ports acts as a gateway into an adjacent brownfield landbank of some 2500 acres, with additional developable land on the north side of the River Tees. Together the port, river and land provide a compelling and profound infrastructure platform for the development of a revitalised and thriving industrial heartland in the Tees Valley – which sits right at the very centre of the Northern Powerhouse economy.

“The addition of Freeport status will give global investors looking to establish significant manufacturing capacity, within a region that embraces industry and aspires to betterment, a further positive reason to locate to the Tees Valley.

“We look forward to continuing to work with the Tees Valley Mayor, the Tees River Community, Industry and Stakeholders in the North to deliver this ambition.”

In January 2018, Mayor Houchen led a campaign to look at the creation of a Free Port in Tees Valley as a test case for the UK, backed by more than 50 leading employers in the area, including PD Ports, Hitachi Rail, Sirius Minerals, Liberty Steel and Quorn Foods.

In a letter to then Chancellor Philip Hammond MP, he cited Richmond Yorks. MP Rishi Sunak’s report on Free Ports for the Centre for Policy Studies, which found they could create more than 86,000 jobs nationwide.