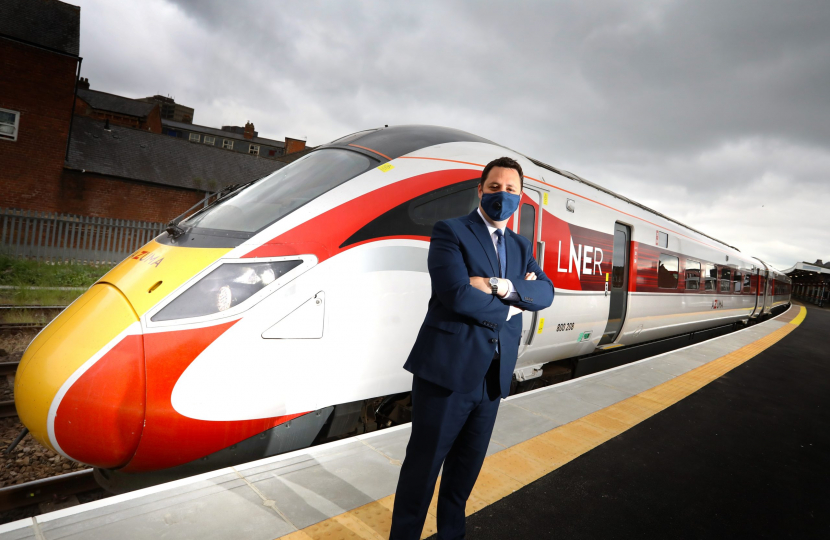 Tees Valley Mayor Ben Houchen has today (04 April) outlined a raft of transformative transport projects across the region that will be funded through the £310million secured from the Government to invest in local transport priorities.

Stations across every borough will receive a share of £86.5million, with investments in Darlington, Eaglescliffe, Middlesbrough, Redcar, and Billingham. The two stations at Teesworks – South Bank and British Steel Redcar – will also be enhanced, as will the transport links to access them.

This is in addition to line speed and capacity improvements, as well as part-funding to resolve issues between Eaglescliffe and Northallerton, where low bridges and tunnels restrict the size of freight on the line.

There will be further investment in the region’s roads, with £82.9million passed on to Local Highways Authorities to help them address local priorities, including highways maintenance, including fixing potholes, and small-scale road improvements.

Active travel routes to facilitate walking and cycling will benefit from £46.2million, with 12 such routes across all five boroughs earmarked for upgrades, including Redcar town centre to Teesworks, Yarm Road to Teesside International Airport’s in-development £200million business park and Thornaby to Stockton town centre. On top of that, the current network of Active Travel Hubs will be expanded to support the public and make it easier and safer for people to take advantage of the new and existing walking and cycling infrastructure.

For those people who don’t own a vehicle or aren’t close to public transport links, £3.5million will be invested to continue the region’s Wheels 2 Work scheme – which gives people access to electric bikes to help them get to and from work – and also the Tees Flex on-demand bus service, so no one is left behind.

The funding won’t just make it easier, faster and smoother than ever to get to, from and around the Tees Valley, it will also be used to ramp up our work as a hydrogen and low carbon powerhouse for the UK. A total of £31million will support the rollout of hydrogen vehicles, as part of our status as the UK’s first Hydrogen Transport Hub, and £2million backing the transition to electric vehicles in the region.

A move to digitalisation will also see significant funding used for smart city technology, helping to make the road network more efficient and responsive, and improve customer information. Technology to enable real-time responses such as changing traffic light timings would minimise delays due to planned large-scale events like football matches, or unforeseen circumstances such as traffic accidents.

Mayor Houchen said: “In October we were able to secure £310million from the Government, the biggest ever pot of money secured for local transport priorities. The  sweeping investments will touch on every corner of Teesside, Darlington and Hartlepool and mean local people have the good-quality transport they rightfully deserve.

“The funding will support everything from huge, transformative schemes such as Darlington and Middlesbrough’s station upgrades to smaller but no less important developments like better bus shelters and cash to maintain roads.

“With 2022 our year of construction, work is ramping up on the Teesworks site, and it’s vital that we invest in the infrastructure there now so that it has the best transport links possible and the workers of the future, no matter how they travel, aren’t left behind.

“As we continue to pioneer the cleaner, safer and healthier industries of the future this money too will help drive forward alternative, low-carbon fuel vehicles, and also help people to make more journeys on foot or on their bikes.

“When taken together, these schemes will go a long way in futureproofing our transport network and give local people the fast, reliable, safe services that they deserve and have been crying out for.”