My plan for local jobs 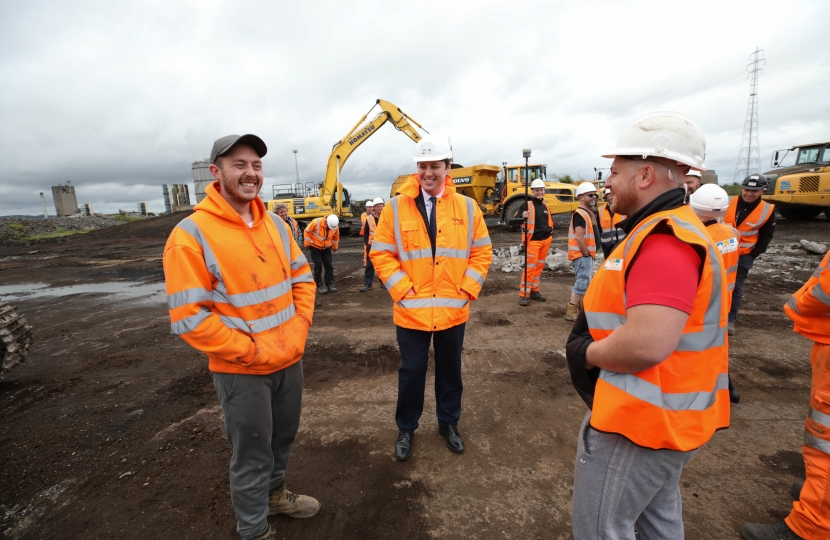 10-year plan for our airport

After years of wilful neglect by Labour politicians and Peel, I pledged in 2017 to bring our airport back into public ownership and to save it from closure. Doing a deal in December 2018 meant we could turn the fortunes of our amazing airport around.

10-year turnaround plan to turn this critical regional asset into a success story is already 2 years ahead of schedule. New low-cost airlines have been secured, with Ryanair flights to Alicante and Loganair flights to Heathrow amongst highlights of the new routes. The airport is on track to reach 1.4 million passengers by 2029, and my plan will drive the creation of 7,600 jobs and add £420 million to our local economy each year. With my plan the hated £6 passenger fee can finally be scrapped and we can return our amazing airport to profit.

18,000 jobs with the Teesside Freeport

For years I've campaigned in the corridors of power to bring freeports to the UK because I knew how transformational they could be to Teesside, Darlington and Hartlepool. Securing the UK's biggest freeport for our region in the Spring Budget means more investment and more jobs for Teesside, Darlington and Hartlepool, including the reshoring of good-quality manufacturing jobs from abroad for local workers.

The Teesside Freeport will create 18,000 skilled, good-quality, well paid jobs over the next five years, pumping billions of pounds into the local economy and more money in the pockets of local workers for them and their families.

Thousands of jobs at Teesworks

We've secured all of the land at the former Redcar steelworks, now I'm getting on with the job of breathing new life into the site so that it can be home to good-quality, well-paid jobs once again.

Covering 4,500 acre the former Redcar steelworks is the biggest regeneration and investment opportunity in the UK. Renamed Teesworks I've turned the site in to a massive centre of job-creation. in the last 8-months over 500 skilled, well-paid jobs have been created for local workers who are transforming the site and getting it ready for further investment.

BP is leading a consortium of the world’s biggest energy companies to develop the world’s first industrial scale carbon capture, utilisation and storage facility, a project that will create over 5,000 jobs. GE Renewable Energy is building their first UK factory to manufacture massive 107m long blades for the next generation of offshore wind turbines, creating 2,250 skilled jobs. We have planning for 4.5million sq ft of manufacturing space on the South Bank of the River Tees that will create 9,000 jobs for local workers. And we have submitted plans for the entire Teesworks site for 9million sq ft of business and industrial space that will create 11,400 jobs when fully operational. Taken together we're on course to surpass the 20,000 jobs target laid out in the site’s Master Plan.

Better transport across our region

Improving transport across Teesside, Darlington and Hartlepool is a central to my plan for jobs - it's pointless create good-quality, well-paid jobs for local people if people cannot get to them. I'm investing tens of millions of pounds in improving our regions transport. I've invested £34 million to transformation Middlesbrough Station, with work now underway so that we can get a direct service to London by the end of the year, and I've committed £25million to the expansion of Darlington Station and secured a further £80million from government for the project. These investments will not only create and facilitate huge numbers of new jobs but will free up space on our rail network for new, faster local routes. But improving our railway stations doesn't stop there, I'm investing millions of pounds at Hartlepool, Billingham, Eaglescliffe, and Teesside Airport station amongst others.

The new TeesFlex service which I introduced is bringing back bus services to parts of the region which have been without buses for years, making sure people can get to jobs, training, health services and their families. I've committed £24 million to the new Tees Crossing and I'm Government to put its hand in its pocket for the hundreds of millions of pounds the project will cost. I'm pushing ahead with the £200 million Darlington link road project to get our road network up to speed. With millions more invested locally in roads, commuter routes for cyclists, electric vehicle charging points, and innovative hydrogen transport research.

Following intensive lobbying of the Prime Minister, the Chancellor and any official in Whitehall that would listen I secured the relocation of a huge part of the Treasury to Darlington. This will see 750 of the most senior civil servants from the Government's most powerful and important department move to the region, joined my ministers and the Chancellor himself. Treasury officials will be joined in Treasury North by senior officials from the Department of International Trade who will be relocating over 500 senior civil servants to Darlington, with more departments to follow. Government will soon beat with a Darlington heart creating hundreds of jobs for local people at the heart of Government.